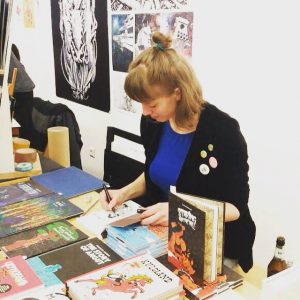 Karochy (also known as Karolina Chyzewska to those whom can manage the correct spelling) was birthed in the city of Göttingen in 1986. At the age of ten, she came face to face with her first rival in a dual of who can best draw the Sailor Soldiers. The bond was never broken and they are best friends to this day. The rival/best friend went on to study in France; Karochy in the Kassel School of Art and Design. There she specialized in animation, illustration and graphic storytelling. During her studies, she met her comrades in action and began their journey to occupy the world, giving themselves the powerful name – Die Goldene Discofaust; the collective of women reign through art, parties and love. Since graduating in 2014, Karochy works as a freelance animator, illustrator and comic artist based in Berlin.
2021 she received a grant from the Berliner Kultursenat and spends 6 months in the Cité internationale des Arts à Paris.